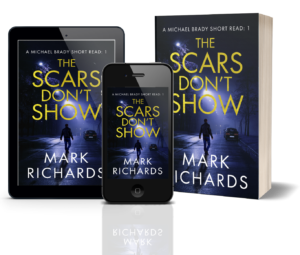 Michael Brady is willing to risk it all

His career, the woman he loves. Maybe even his life

‘The Scars Don’t Show’ is the first Michael Brady Short Read. Books you can read in an evening.

The story takes you back to the start of Brady’s career.

Sarah Cooke’s been strangled – and there’s an obvious suspect.

“His fingerprints are all over the house. His car’s on CCTV. The old lady across the road, the incident before Christmas. Four boxes: four ticks. That’s enough for me.”

Brady has his doubts. But who’s going to listen to a rookie detective? Someone on his first murder case: someone who’s “playing detective for the day…”

“He’s abused his wife. He’s cheated his brother. But that doesn’t make him a murderer.”

But it’s not his decision. Brady and his partner are sent to make the arrest.

It goes wrong. Badly wrong. As wrong as an arrest can go.

And Brady wakes up in hospital…

AVAILABLE TO PRE-ORDER FROM 31st MARCH 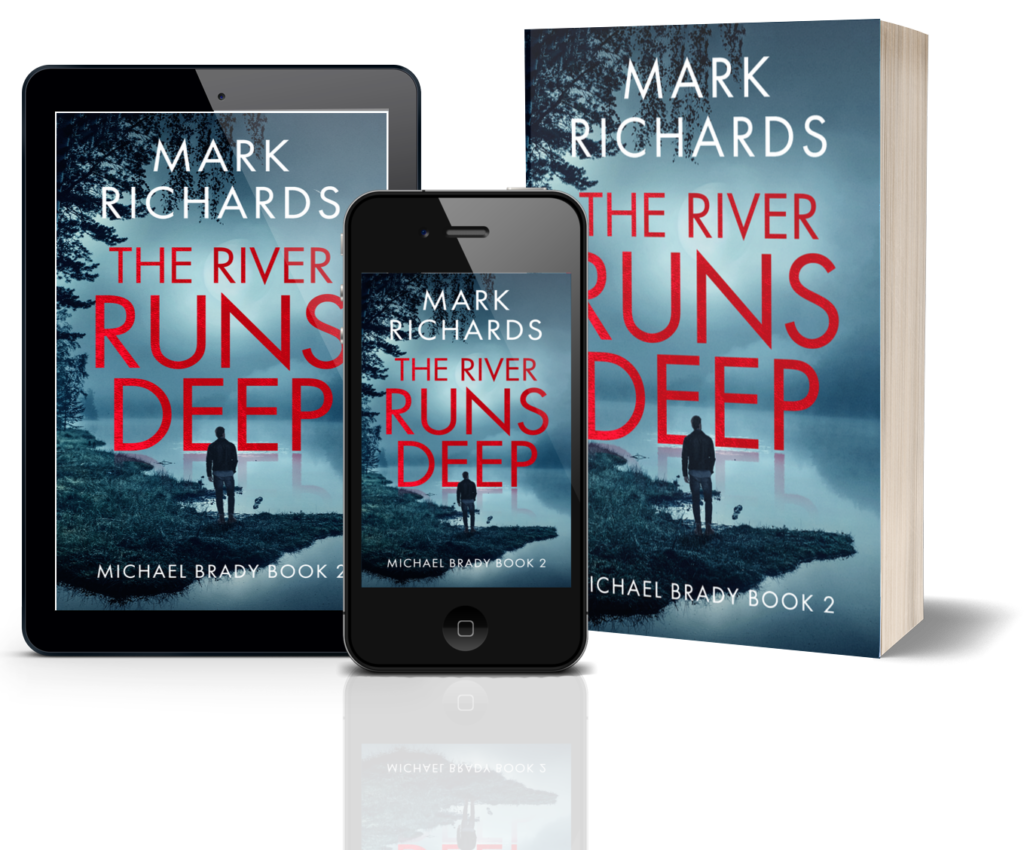 Gina Foster’s body has floated down the River Esk.

But Michael Brady has his doubts.

It’s a year since his wife died. He’s back in the police force, trying to prove himself to a new boss. And be a good dad to his teenage daughter.

Is it murder? Or does Brady need it to be murder?

Brady’s convinced the answer lies in Gina’s past. But his boss is doing everything he can to stop Brady finding out what that past was.

Then DS Frankie Thomson uncovers the truth. And suddenly there’s not one person who might have wanted to kill Gina.

There’s a hundred and one… 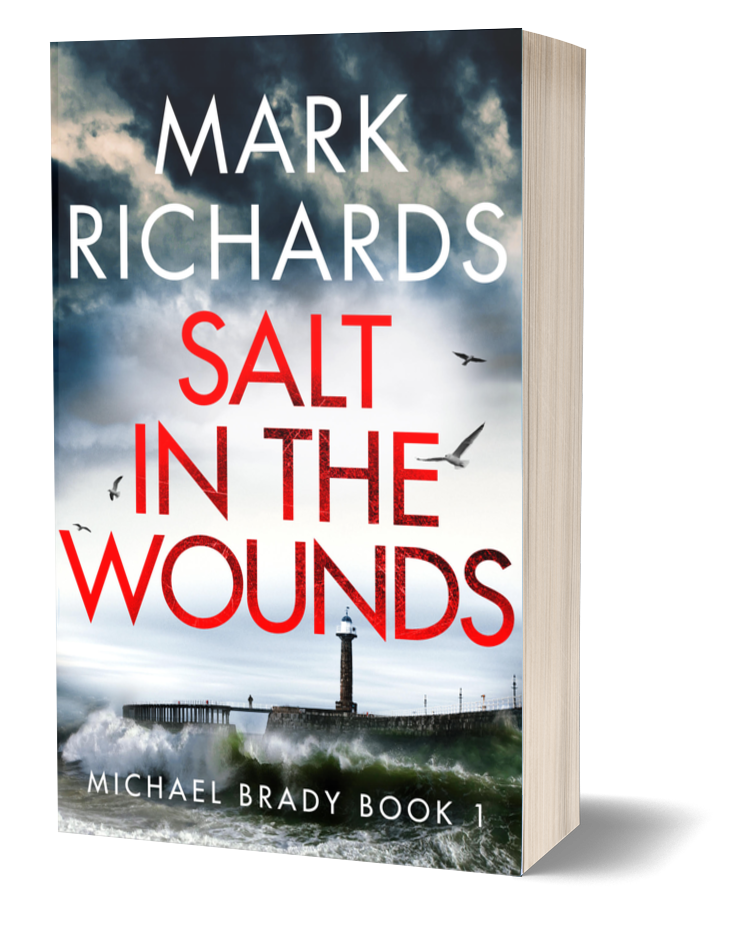 Salt in the Wounds

Michael Brady was a detective.  A high-flying detective, working on a high-profile case.

And much too close to the truth.  Someone arranged a hit-and-run.

They missed Brady. And hit his wife.

And after six months sitting by her bed, he took the only decision he could take. He turned the machine off.  Now he’s back home in Whitby. Trying to rebuild his life. And be a good dad to his teenage daughter.

But when his best friend is murdered at the Goth Festival Brady – unwillingly at first – is drawn into the investigation.

And when the only people he has left are threatened, he finds there’s only one answer.

Going back to the life that cost him his wife… 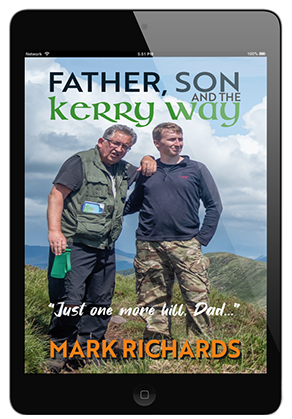 Father, Son and the Kerry Way

“This book is the best yet. Made me laugh out loud – and in some cases wake my wife up because I was laughing so hard.”

“I’ve never been to Ireland, let alone Kerry, but this book – with all its wonderful descriptions – had me hooked from the beginning. A brilliant and informative read.”

The book is written in exactly the same style as the first two ‘Pennine Way’ books. There’s the usual cast of characters and – sadly for one of us – there’s an Irish bog lying in ambush…

I loved Ireland. I loved the people and the scenery. But there were different layers to Ireland as well – the sense of history, and the feeling that you could almost touch the myths, legends and folklore. I hope I’ve captured all that in the book.

Available on Amazon from £3.99 (Kindle edition) 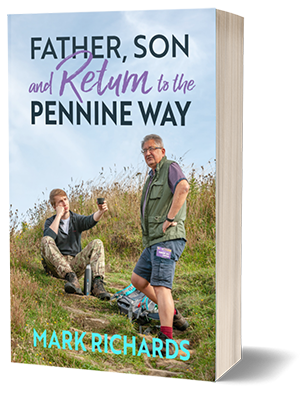 Father, Son and Return to the Pennine Way

In 2018 Alex and I were back on the Pennine Way. This time he told some of the story…

Sometimes I go with Dad when he takes Pepper out for a walk. She stops to check out a pizza box or a discarded barbecue. She has a wee. She finds something to roll in. While she’s doing that you can shout for her to keep up. But it’s a waste of time. She’s a Spaniel. She’s doing exactly what Spaniels do.

By Thursday I’d realised that was exactly the way to treat Dad. Just pretend he was a Springer Spaniel and don’t get stressed. He’d stop for a wee, try and kill a few horseflies and want to go in the wrong direction. But as long as I kept walking he’d catch me up…

Available on Amazon from £2.99 (Kindle edition) 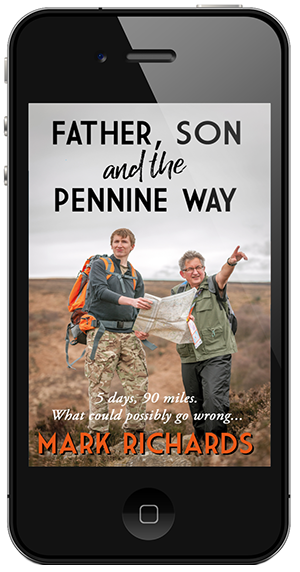 Father, Son and the Pennine Way

Five days on the Pennine Way with my youngest son.

The challenges we faced, the experiences we shared and what we learned about each other.

“A great read. I’d recommend it to anyone with even the remotest sense of humour.”

Available on Amazon from £2.99 (Kindle edition)